There’s been a huge boom in the number of e-cigarette users these past few years. This, combined with the fickle vaping rules and regulations that are seemingly changing on a day-to-day basis, means there are probably quite a few of you out there wondering how to go about traveling by air with an electronic cigarette.

It’s hard to find clear and up-to-date information online. Will you be able to bring your pod mod in your carry-on, or will it be stopped at security? Would a smaller cig-a-like model from the likes of V2 Cigs have a better chance of being let through customs? Is is possible to vape in airports? Will some airlines even allow vaping during a flight? Or would it trigger the smoke alarm if you decided to vape in the bathroom?

If you’re a vaper, I’m sure you’ve all wondered about at least a few of these questions. Below is a detailed overview of the various regulations and what the airlines generally tolerate. Even though some airlines and airports may differ slightly, these are the broad rules that apply to most cases. 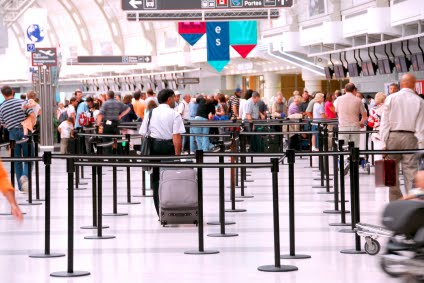 Can you vape in airports?

Any seasoned traveler will probably have guessed that this can only be answered on a case-by-case basis. Most airports in the US that allow vaping will do so in the “traditional” smoking zones. As a rule of thumb, smoke-free airports will generally forbid vaping altogether. If you’ve traveled further afield before, you probably know that certain less-developed countries will allow traditional smoking pretty much anywhere. As you would have guessed it, rules will also be very lax on the topic of vaping in some of these countries.

There are several international airports that are known to allow vaping, but since it is such a new practice and these rules tend to change constantly, it’s best to check with the airports where you’ll be commuting ahead of time to be sure. 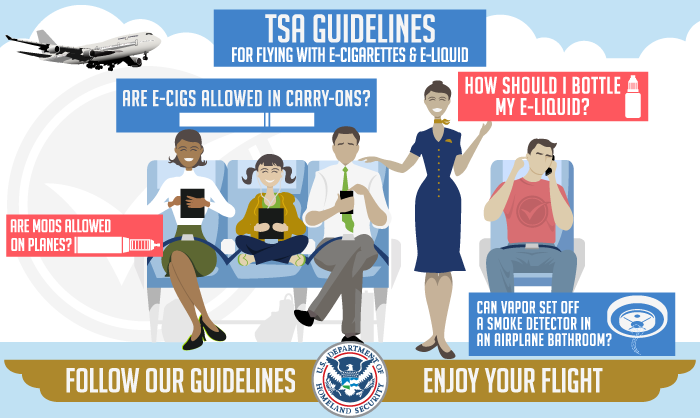 Can you vape on a plane?

In short: no. But even if the answer was yes, the relatively new nature of e-cigarettes means that many people don’t understand the technology and could get confused or angry about you using them them. The longer answer is that it varies from country to country, and from airline to airline.

Generally speaking, it’s a no-go across the board for all U.S. airlines — and if you think that vapor will not trigger the bathroom’s smoke alarm, it unfortunately does. However, some devices, such as the Mark 10 XL, offer a smokeless technology in a very small package that can go completely unnoticed. We don’t recommend it, but whether you decide that it’s worth risking getting caught vaping on a flight is entirely up to you! Read this article on stealth vaping and decide for yourself. 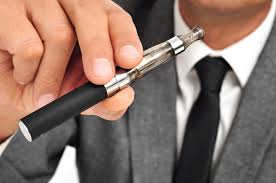 Should I carry my e-cigarette in the cabin or in my checked luggage?

2016 was a year that vaping received plenty of press coverage — not all of it positive, and not all of it factually sound. This is in part due to the new FDA regulations, but also because of several incidents of overheating and exploding e-cigarette batteries. Because of this, the new rule for most airlines is that you are only allowed to travel with your e-cigarette in your checked baggage, for fear that they might overheat and explode in the checked luggage compartment.

We recommend that you check your airline’s policy, as they may have other restrictions depending on the vaping device you own. Your electronic cigarette, spare lithium batteries, and e-liquids must be removed from your bag at security and will be inspected, so it’s probably better not to travel with anything that looks too suspicious. And since e-juices are almost always conveniently packaged in small bottles, they can be transported without a problem in your carry-on with your other liquids of less than 3.4 ounces.

With ever-changing regulations, staying up to date and using caution with vaping devices from V2 Cigs, Mark 10 or otherwise is the best advice. If you are still unsure about the rules, traveling with a disposable e-cigarette and discarding it just before you fly might be the safest option to avoid any hassle.