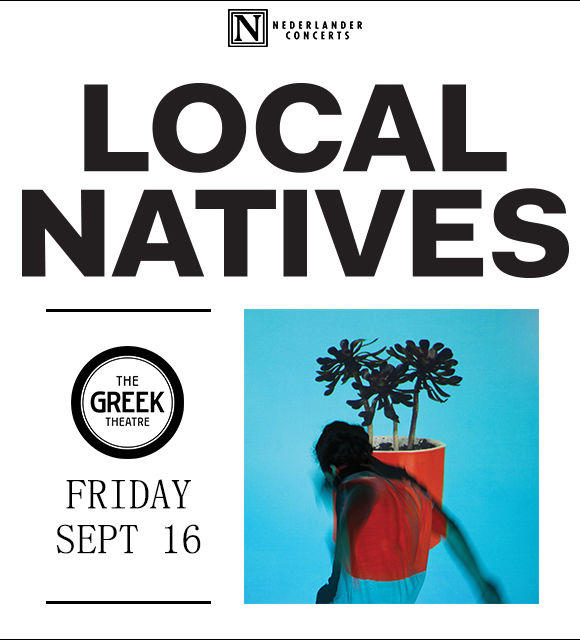 Local Natives has always been a band that believe in equality, safety, and dignity of all people. They have partnered with Plus 1 so that $1 from every ticket is going to support gender-based violence intervention and prevention programs.

Local Natives today announce the release of their third album Sunlit Youth, out September 9 on Loma Vista Recordings / Infectious Music. The LA five-piece broke a year of silence with a pop up show in San Francisco in April, and the surprise release of their first new track in three years, Past Lives. Following further west coast pop up shows in San Diego and the band’s hometown of Los Angeles (“people lost their shit” – VICE), Local Natives today announce a full world tour slated for this Fall with a performance at The Greek Theatre in Los Angeles on Friday, September 16 with special guest Charlotte Day Wilson.

Local Natives premiered the album’s opening track, Villainy, as a World Record on Zane Lowe’s Beats1 show yesterday and today showcase a visual for the song that is as much a love letter to their hometown as it is an exuberant summation of feeling within the song. The clip was directed by Andrew Droz Palermo with art direction from Brian Roettinger.

“A lot of the excitement in making this new album came from discovering how to make songs in different ways,” Ryan Hahn says. “You start thinking, ‘What do I want to hear?’ Forget about what we’ve done and what people expect. This is a song that I would want to hear. Lyrically, Villainy is about realising that you have the ability to change your situation, that you can start again everyday. We applied that to how we made music this time around. We wanted all the new songs to have a different energy, to challenge ourselves to do something different each time.”

Sunlit Youth caps a trilogy of albums for Local Natives, which began with their 2010 breakout Gorilla Manor, followed by 2013’s Hummingbird, which earned worldwide acclaim and opened at #12 on the Billboard 200. Together, the two albums have sold over 300,000 copies worldwide.

Local Natives will tour extensively worldwide in support of Sunlit Youth, including select summer festivals and an autumn tour announced today and taking in the US, UK, and Europe.

Download: They are also offering a digital download of Local Natives’ new album, Sunlit Youth (coming September 9, 2016), is included with every ticket you order for this show. You will receive an email with instructions on how to receive your download following your ticket purchase.