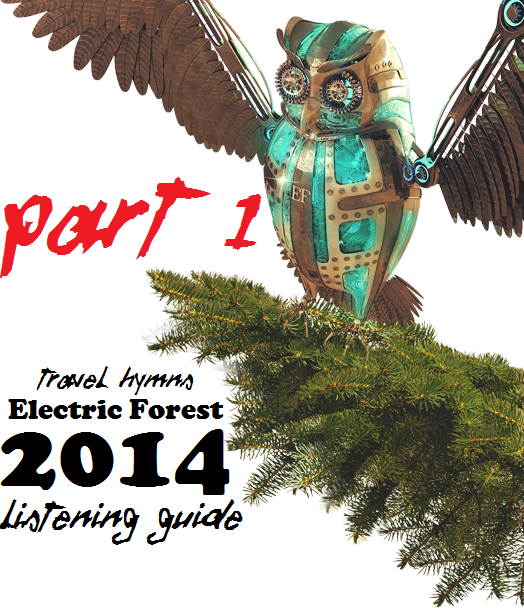 London’s own Alex Drury has long been inspired by funk and disco. With a sharp ear for melody, his remixes feature huge names like Phoenix, Ellie Goulding and Bloc Party.

Aloe Blacc exploded into the public spotlight with tracks like ‘I Need A Dollar’, his momentum hardly slowing. One of the most soulful artists showcased at Electric Forest this year.

Originally born in Sweden, Osborne is an American singer and songwriter who grew up with influences like Bob Dyaln, Neil Young and more. His vocals were shaped after Ray Charles and other soulful legends of the past.

English bred Andrew John Clarke, or Andy C, is the producer and co-founder of the RAM Recording Studio. He’s considered one of the originators of the drum and bass genre.

Talented and beautiful, Anna Lunoe followed in the wake of other talented Australian producers like Flume. Most of her commercial work are actually direct collabs with Harley Edward Streten.

Far from traditional, Art Department is a unique collaboration from two veteran producers who toyed with a collaboration for years. The finished product proved hugely influential among the electronic scene.

Two casual acquaintances in a Vancouver high school art class would later form Bob Moses, described only as ‘music that will make you want to build a highway through a low income neighborhood.’

The Berlin duo of Walter Merziger and Arno Kammermeier are longtime pioneers among the electronic scene, their work dating back multiple decades.

Believe it or not, one of the biggest figures in trap hails all the way south to from the great state of Texas. Bro Safari has produced some of the most recognizably sampled tracks among the EDM circuit.

An electropop duo borne from the love of 80’s dance and funk, Jordan Kelley and Jason Huber strive to create original pop music in a genre full of repitition.

Ann Arbor’s Jeremy Malvin, or Chrome Sparks, was inspired by classical percussion and obsessed over synthesizers, influencing his heavy lean toward disco tones.

The duo of Disco Biscuits’ March Brownstein and Aron Magner often incorporate guest musicians within their live performances. Every performance is markedly different.

One of the smaller acts looking to make a name for himself this year, Michigan’s own Dantiez Saunderson only forayed into music in 2012 at the age of 20. His fast rise in the scene is nothing short of swift.

One of the few alternative rock bands present this year, Georgia’s Dead Confederate are the work of childhood friends modeled after artists like Neil Young and Pink Floyd.

Destructo has somewhat quietly lived in the cut as a producer, perhaps more better known for his brainchild of HARD Productions, but there’s few that can match his sensibilities as a producer in the EDM world.